The first weekend in June, Scott and I attended my five-year reunion at Notre Dame. It’s hard to believe it’s been five years, as each trip I take to campus, I still feel like I’m returning for the start of a new school year or post fall or spring break. My daydream never lasts long as the thoughts of my now “adult” life set in.

This time was a little different though. I actually did feel like a student moving in again, as the university allows and encourages returning alumni to stay in the dorms. It’s incredibly convenient and they put each class together in one dorm.

As we checked in to Keenan Hall with suitcases in tow, it was a strange feeling for many reasons. First, I did feel like a student moving in again. Second, Notre Dame is a Catholic university that has single-sex dorms and this was a guys dorm. Third, Notre Dame also has rules called parietals that set curfews when guys have to be out of girls dorms and vice-versa. If you’re caught breaking parietals, you get what they called a “res life” that is essentially a point against you in your university file. Even though Scott and I are married, staying in the same room with him was giving me nightmares. I kept thinking I was breaking the rules and going to get busted by a priest. 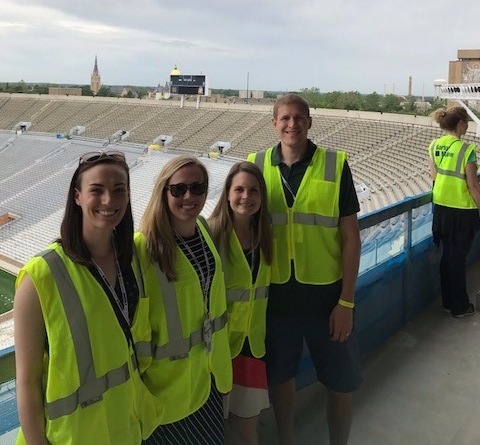 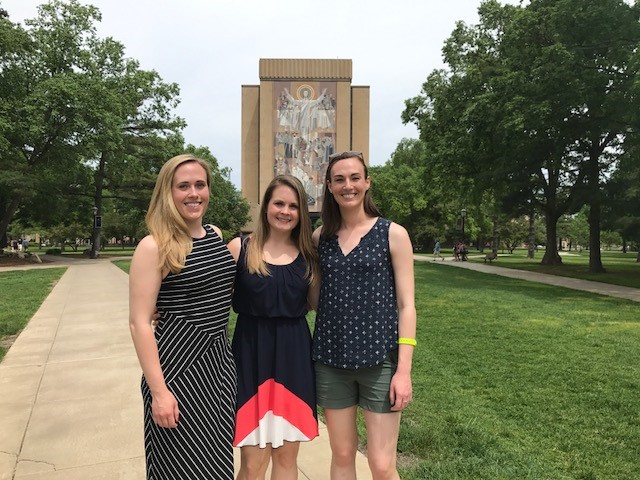 Throughout the friend, food, and fun filled weekend, I had so many memories come flooding back. One of the first things Scott and I did on Friday was attend the College of Engineering open house in Stinson-Remick, the second newest engineering building on campus. As I looked around during the short speech the dean gave, I realized that this was the first time that some of the older alumni had been in this building. I thought about the hours I had spent in this building working in the learning center, studying for hours, working with first year students as a TA, and meeting younger students as part of a peer mentoring group, and while the setting may have been different, the other alumni still experienced so many of these same things that contributed to our learning experience and technical knowledge while forming friendships that last a lifetime. As I looked around the room, I started wondering what each of these engineers did and how their careers had changed over time.

Many of my own classmates were there, some of whom I hadn’t seen since graduation day. The conversation picked up right where it left off, and it was like we were just coming back from the summer break. Instead of talking about summer travels, upcoming classes, and such the chatter was about honeymoons and vacations, jobs and career changes, favorite restaurants, and complaining about all of the fun that comes with “adulting.” I loved hearing where everyone was in life, the newfound hobbies discovered, and the interesting things people were working on. Meeting significant others for the first time was one of my favorite things because I could truly see how happy my friends were as they introduced or talked about the person.

It’s funny to see the wide spectrum of where people are at in their lives at a five-year reunion, ranging from married with two kids to still living the college partying lifestyle and everything in between. As I thought about what my “five-year plan” was when I graduated five-years ago, it certainly didn’t include being married or back in Pennsylvania. I would have anticipated still being in Texas or some other ExxonMobil site, still working in oil and gas and in or working towards a management position. I had plans to go back to school within five years for my MBA (Mission accomplished!), but the other degree, the MRS degree that comes with marriage was certainly not on the horizon. It’s funny how life works out.

On the way home, I started thinking about where I wanted to be five years from now, ten years out of school. In the past, where I would have jumped right to my career, I started thinking first about my family and what I hoped for Scott and I. A happy, healthy, faith-based marriage, one or maybe two little ones, trips to Ireland and the Grand Canyon or Yellowstone, nights sitting out at a bonfire, hiking adventures and such.

When I turned the perspective to think about my career, I got anxious and felt the tension mount in between my shoulder blades, the weight on my shoulders like a bar with 45 lb plates draped across my traps. It’s the pressure I’ve lived with for years. It’s the go-getter, got to achieve, push push push pressure: be a starter on the team, be captain of the team, get a 4.0, get into Notre Dame, make the Dean’s List, get a great job, excel in the job, get my MBA, work up the ranks, drive, drive, drive. Desire and motivation are not bad qualities, but like most things, in excess, they can change the outcome and be a distraction to your true goals.

In the car, I pulled out the 2017 Reflect & React mind map that I created at the beginning of the year to help ground myself and review where I was. There are ten groupings on that mind map, ten areas of my life that I deemed important to me, and only one of those was career oriented. So why, then, do I feel so much pressure in my career? I don’t want my career to define me, but I fear that it does and that it will. Society puts a lot of stock into people’s careers, titles, corporate accomplishments, and the like. My type A personality and desire to please everyone has gotten caught in that. I have this fear because my corporate life is not what I want to be known for. I don’t want to be known as a consultant, engineer, plant manager, project manager, or any other “official” title. I want to be known as a faithful Christian, a loving and devoted wife, daughter, sister, friend, and one day mother, a leader and lover, a supporter of others, an activist and inspirer. The first step in doing so, is change my own mindset, to see myself first in those ways I want to be known and to live in a way that exemplifies those titles. Those are the titles that I truly care about.

Side note: My original plan was to publish this post on Wednesday morning, but Tuesday night, I had something happen that I had to share. Scott and I joined St. Alphonsus Parish in Wexford back in January after “shopping” around the area for churches. I signed up to be a lector when I saw an advertisement in the bulletin in March, and after filling out paperwork, getting my clearances, and passing an online course, I was finally certified. Since I was traveling every week for work and we were out of town a lot of weekends for fun, I didn’t have an opportunity to get trained until this Tuesday when all of the church’s Eucharistic ministers (people who help the priest serve the congregation Holy Communion and Precious Blood) and lectors (readers) were gathered for an annual meeting.

During the meeting, the priest and leader of the volunteers mentioned how difficult it is to get Eucharistic ministers (EMs) and that they usually do not have enough to offer the Previous Blood at the different masses. The thought of becoming a Eucharistic minister had never crossed my mind before because I never take communion from anyone but the priest, or at least I haven’t since I was 17. My godfather is old school like that, and I told him from my confirmation day on, I would do the same. It feels hypocritical to serve someone Holy Communions when I wouldn’t take it from them. The Precious Blood, on the other hand, is rarely served by the priest and wasn’t part of the “deal” you could say. This put the thought in my mind.

About ten minutes later, the conversation turned to a need for EMs to administer Holy Communion at a local nursing home. I felt like God was speaking directly to me. Both of my mom’s parents, who I was incredibly close to, were in the nursing home, my Pap for nine years after an aneurysm ruptured in his aorta and left him paralyzed and my Mimi for about two and a half after her congestive heart condition made it impossible for her to live on her own. I spent a lot of time there visiting with them, especially with my Pap since I was only 5 when January 5 changed his life forever. I saw what it was like for many of the people there, spending every day cooped up inside, little interaction with family, if any, and limited social life. It was incredibly lonely for so many, and though we would try to get my grandparents to church as often as we could, it was very difficult. Fortunately, our parish priest would visit the nursing home for mass a couple times each month and on the off-weeks, EMs would visit and allow patients to take part in our Lord.

It’s been an incredibly difficult past couple of months, filled with missing my Mimi. There’s been so many times I have wanted to pick up the phone and call her about something or even just hear her voice. There’s been a lot of firsts without her; her birthday, Mother’s Day, Memorial Day (which she loved), and soon Scott and my first anniversary. I’ve been longing for something more than just memories and stories to connect with her, and I think this was her way of saying she is here. 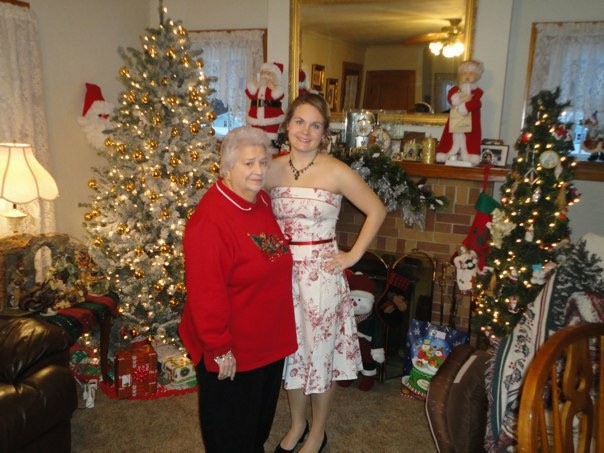 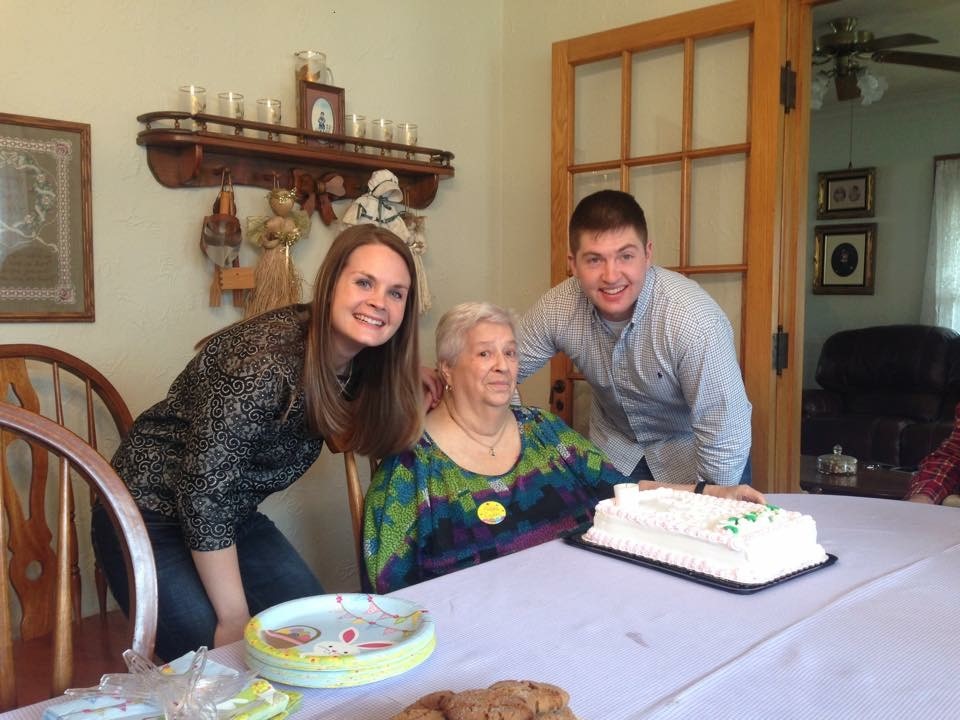 I was trained Tuesday to be an EM as well, after explaining my deal with my godfather to the priest (I think he thought I was crazy, but he is happy to have the help.). This Sunday, I’ll go to the nursing home for the first time of what I am sure will be many.

Springing Forward: Things to Consider Before Leaving Your Job for Another in Corporate America

It’s hard to believe, but it is February. We are 1/12 of the way through the year, but hey- Punxsutawney Phil didn’t see his shadow, and spring is just around the corner after the Polar Vortex. Compan

From a Home in Cranberry, PA, to the Homewood Suites